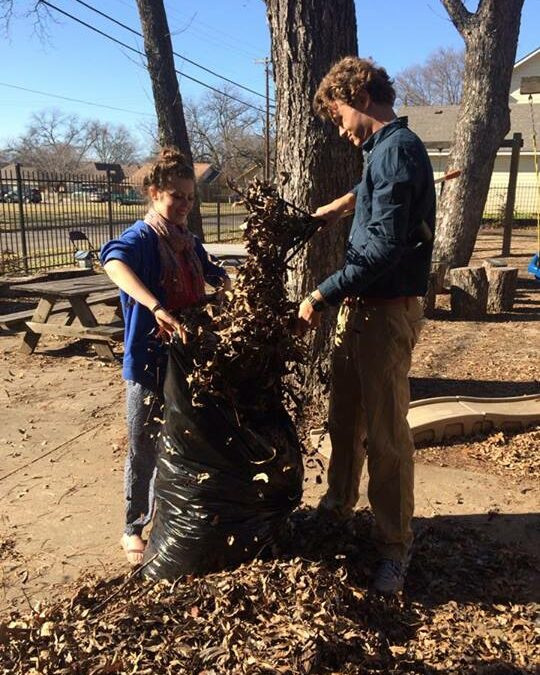 During the winter break, while all was quiet and peaceful at the end of the temple block known as TKG Academy, a storm erupted.  The bus tour coming from Mexico descended upon the playgrounds.  Nearly twenty youth, along with many of our own youth from Dallas, decided to give the school grounds some tender loving care.  I was out of town and you can guess my reaction when I returned and saw the transformation that had occurred.  I was elated!

The new ramps which had been installed during the summer break, needed priming and painting.  During the first part of school, Joseph Clark who had been coming to the Wednesday classes, came several times and began the painting.  We found it a bit difficult to have fresh paint in the porch area when children were around so he was asked to come back to paint during the winter break.

And then the service hungry youth appeared.   Manorama Dasa  has long been known for taking temples by storm with his energetic, talented youth.  Some of our devotees here in Dallas realized that the grounds at the school needed raking and that the ramp painting needed to be completed.  Someone told me that Krishna Mangala Dasi along with her children and many of our young men and women, gathered the bus tour youth together, and tackled the job.

Needless to say, things got done.  The playground yard was immaculate, the long ramps were primed and painted, the porch roof was swept off, and all those leaves and sticks were bagged and hauled to the street.

Mother Jayanti says,  “I wish to thank all of those persons who were involved in this project.  This is the sort of work that makes an old woman happy to see accomplished.  I just wish that I could have been there to thank these devotees personally. “

Please have a look at the wonderful pictures.