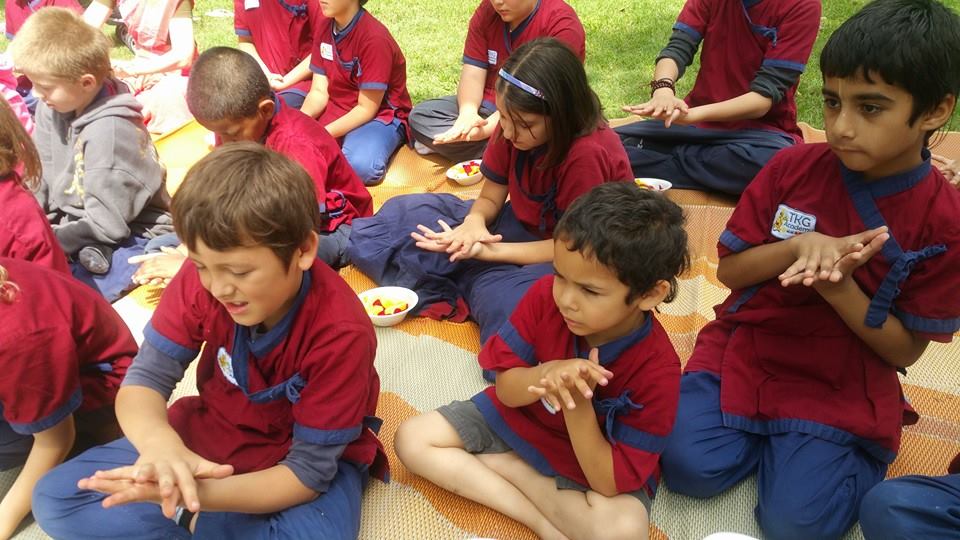 The sound of “Svaha”s, and the crackling of Sri Agni, holy fire was carried by the breeze throughout Kalachandji Park.  The weather was just perfect as TKG Academy students, guided by His Grace Narottam Prabhu & His Grace Nityananda Chandra Prabhu, performed Sri Nrsimha Homa (fire sacrifice) on Friday morning, May 20, 2016.

This offering is a result of a bucket list the students had created at the beginning of the year.  “What would you really like to do in your spiritual classes this year?”  As soon as one of the students said, “A fire sacrifice!”, suddenly many others had it at the top of their lists as well.

It was appropriate that it be held at the end of the year, and that too, on Sri Nrsimhadeva’s Appearance Day.  Sri Nrsimha, accepted young Prahlada’s personal sacrifices so much so that He appeared in a ferocious form to protect his young devotee.  During the entire month, stalwart swamis and devotees delighted the students with His many pastimes, increasing their deep trust in the Lord.

How expertly Narottam Prabhu enchanted the children with his explanations.  Every mudra (hand gesture) performed by the brahmanas in these rituals was explained.  “The two thumbs together signify that we are seated right next to the Lord in our heart and never separated.”  The children offered their hearts, their love and their trust into the fire, with symbolic grains of rice and requested protection from all sides.  The auspicious sound of Vedic mantras purified the atmosphere, and the strong fire carried the devotion filled offerings to the sky.

Take a look at pictures of this special event.