Parents are the First Teachers 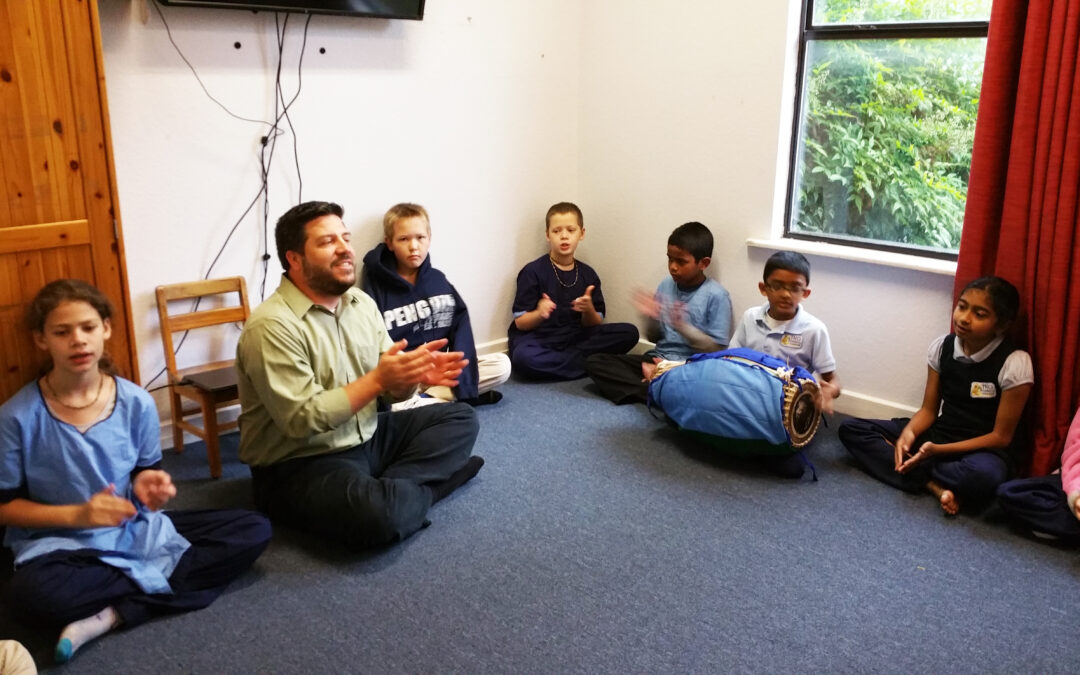 Every morning, TKG Academy students gather to learn about Krishna during sadhana class.  For three weeks in the last semester of school, parents were invited to teach the class.

Classes started with descriptions about Lord Nrisimhadeva’s half-man, half-lion incarnation of Krishna.  Archana Mataji was the first to arrive.  With her peaceful demeanor, she read the Sri Prahlada story to the students, and asked questions.

Daru Krishna Prabhu, after encouraging the children to lead the Nrsimha prayers, spoke about the recent massive earthquake in Nepal and the efforts devotees are undergoing to help the thousands of affected families.  Connecting how Lord Nrsimha protects his devotees to the current affairs in the world, and inspiring the children to take action is a powerful way to integrate the philosophy of Krishna consciousness in their lives.

Gopi Vallabhi Mataji arrived ready with a Jeopardy style game, testing the student’s prior knowledge on Lord Nrsimhadeva!  The children had much fun answering questions in their teams and scoring points.    “Prahlad Maharaj says that his only concern is to:  a.  overcome material existence.  b. give liberation to his demoniac friends.   c.  keep himself away from sense gratification.  or d.  bring back the fools and rascals who are making elaborate plans for material happiness.”  Do you know the answer?

Now that students learned so many details about the pastime, it was time to study His form.  Mother Chitra read a beautiful verse from the Srimad Bhagavatam SB 7.8.19, and proceeded to teach students how to draw Sri Nrsimha’s face.   His angry eyes, His razor-sharp teeth, His shining mane, His erect ears and gaping mouth, all perfectly placed in order to instill fear in the hearts of the those who hurt His devotees.  Step by step, children drew each feature and worshipped the Lord through the process of archanam.

Next, the study of mothers, leading up to Mother’s Day.  Mother Nrtya Kisori spoke about the importance of respecting women in Vedic culture.

The last parent-teacher for the session was Nityananda Chandra Prabhu.  He enlivened the class with his beautiful stories about Go-Mata, the sacred Mother Cow.  He spoke about Working Villages International, non-profit organization dedicated to building self-sufficient, environmentally sustainable villages.  Astotara-Sata, the son of renowned Hare Krishna Dasi, has established an experimental village in the Republic of Congo, where he has shown the importance of Mother Cow for self reliance and sustainable agriculture.   His efforts earned him a prestigious TED Fellowship.

We ended the weeks with exuberant Spiritual Friday programs, worshipping Lord Jagannath, Baladeva & Subhadra.  Thanks to all the parents who taught the class!