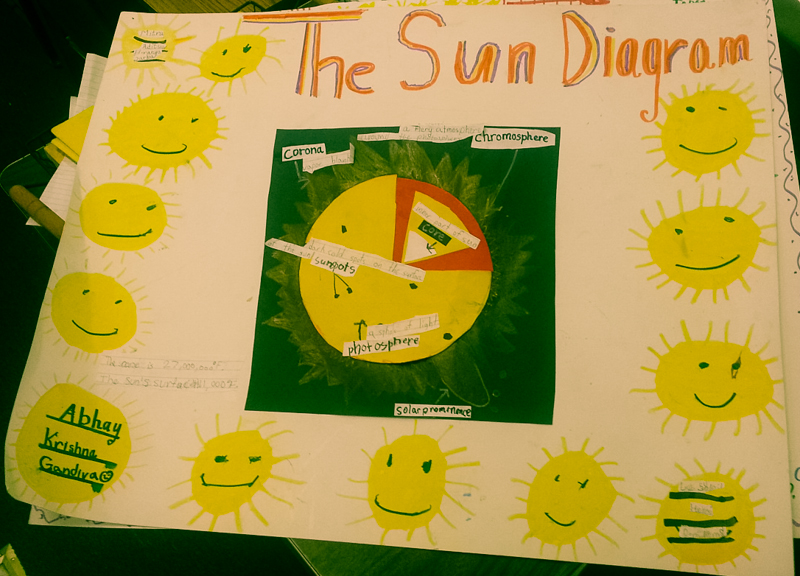 On Monday, January 14, the third to sixth grade students began the Study of Astronomy with the study of the Sun.

It just so happened that this day was Makara Sankranti, where millions of followers of the Vedas, worship the Sun God’s journey towards the north and marks the end of long nights. I didn’t know this until Archana Mataji, one of the younger students mothers, stopped by my office to drop off a pretty golden bag full of gifts as part of her Makara Sankranti worship. I was delighted! This was the day we had set to start our Astronomy class with the study of the Sun Planet first! I took it as an auspicious sign.

In Literature Class, we read the story of the Shyamantaka Jewel. Students took turns reading three or four verses at a time, while others took turns drawing what they are heard on the dry-erase board for everyone to see. Krishna’s dealings with Satrajit a devout worshipper of Surya, the Sun God, brought up the discussions of demigod worship and the importance of the demigods. yanti deva vrata devan – Sri Krishna tells Arjuna: You will go to who you worship. Students began writing out their summaries, with a first draft, second draft and final due on Friday.

In Science class, we studied the details of what the sun is made of (hot, glowing gasses), the inner core, and outer spheres. We touched on the different names of the sun in different languages, and his 12 Sanskrit names were recited.

Students were teamed together in groups to create a Sun Chart. Each student had a different role. One was the artist. Another the scribe. And a third was the researcher. They followed a detailed rubric of how much information was required, and what the presentation should look like. The goal of the project, in addition to helping them learn the different vocabulary terms, was to see how well they could work together as a team.

Here are pictures of the completed projects. 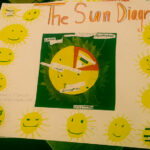 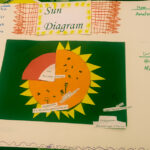