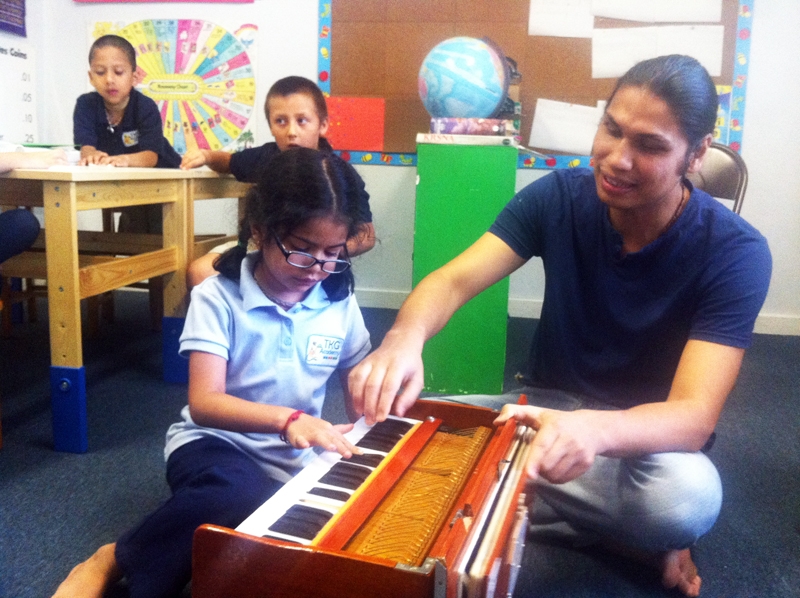 Hari Bhakti Dey was the latest Kirtaniya guest to the Dallas Hare Krishna community.  He is a Gurukula student himself – now all grown up and world famous.  For three weeks, the temple congregation and devotees were swept off their feet.  Every night was booked with programs.  Everyone wanted to hear this prodigy young man, romancing the devotees, with his old-fashioned Ravi Shankar style melodies and charming personality.  He expertly took the audience on a journey of Krishna stories, straight philosophy and elegant old-India ragas from by-gone ages and ancient villages.

He was trained in Bengal and then in Mumbai, by some of the world’s noted classical musicians.   For him, kirtan means a trained ear.  Knowing how to play, what to play, and when.   Making the kirtan attractive, enchanting and mesmerizing is his goal.

He had only time to visit Mother Savitri’s class. 10 kids from Kindergarten to 2nd grade were waiting for him.

He introduced himself as a Dad; a father to 3 young children.  His eldest daughter, Asavari, was named after the most fundamental of Indian Ragas.   He focused the attention of the little tikes with a couple minutes of deep breathing and ‘om’ meditation.  The class calmed down.

Out came a nifty little box.  An Electronic Raagini Tanpura.  With its nifty little buttons.   The kids were intrigued.  Press a button and what comes out! A deep rich tone.  The next button brings a slightly higher sound!  and the next!  This was the Vedic scale of notes.  Sa Re Ga Ma Pa Dha Ni Sa.  Equivalent to the western ‘do re mi’.   One by one, students matched the box’s sounds with their own voices.  Listening very quietly, they had to trust their vocal chords.  Their eyes lit up when they got it! 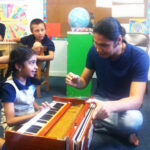 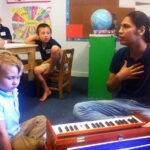 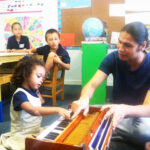 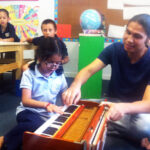 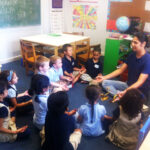 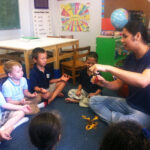 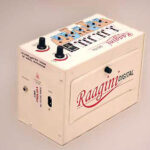 Then on the Harmonium.  He guided them individually, running their fingers up and down the keys, to the Sa Re Ga Ma scale and matching their voices.  The rest of the class followed.

Hari Bhakti then reached for the kartals.  “Listen closely”, he said.  “Every sound in life has a tone.  Every sound fits into one of the notes on this scale.”   He clinked the kartals together.  A high pitched clink rang out.  Is this a PA?  or a Dha?   Buttons pressed, the box sang, and the class looked for the proper match.   Yes!  We found the match!  We found it!  Then he tapped the desk with a spoon.  A fork and a spoon.   The wood bookcase.   With every tap, or ding, or clunk, came a button pressed on the box, a rich sound, and kids voices merging with his deep voice to see if we could find a match.  The classroom became a Sound Lab!

He ended with the Narasimha prayers.  Rasakeli and Gopal led, Rasalila playing harmonium and Gopal singing.  The rest of the class, followed fervently along.   They had found a new appreciation for music and that appreciation would transfer to Kirtan.   I could see them going home, tapping and clanking, singing and droning, looking for matching sounds in their environment, trying to find the notes they had learned.

And what did they learn?  Yes, Kirtan is important.   But kirtan should be pleasing to the ears.  We should know how loud or how soft to play those kartals.  That type of Kirtan is not only important, but necessary.