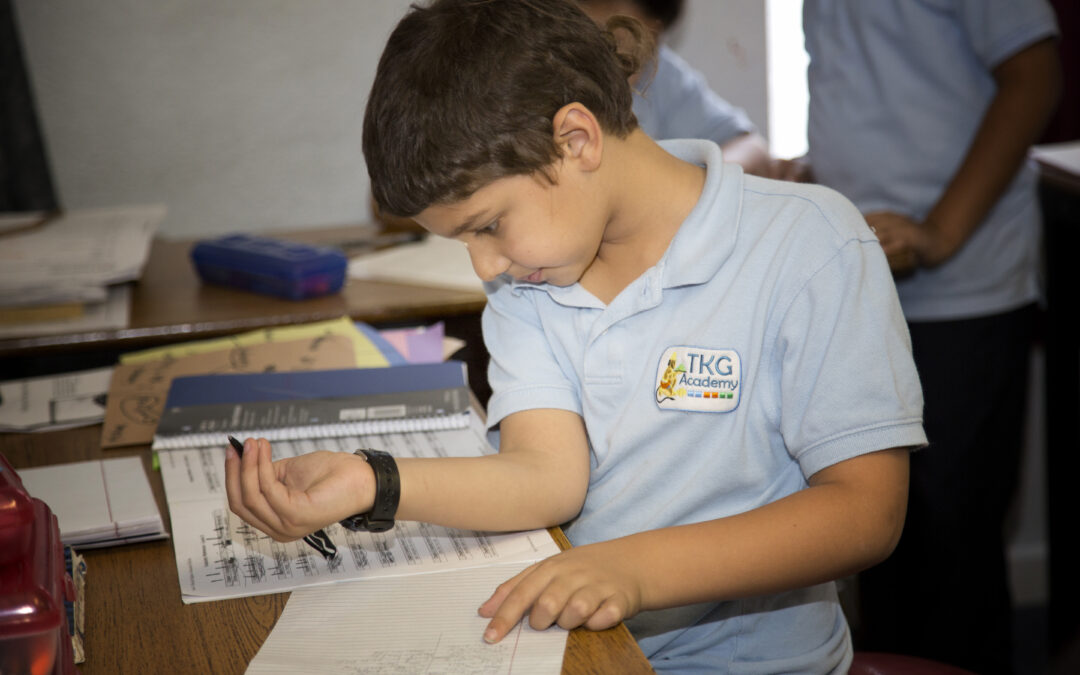 One of my absolute favorite things about teaching a multi-level classroom is when the themes of the grades come together and the entire class is able to discuss as a group. In Language Arts, the compositions that the 5th and 8th graders had to analyze this week were both about dreams.

I was surprised this summer when I found “Dream Within a Dream”, by Edgar Allen Poe, in the 5th grade text. It seemed quite advanced. However, I decided that with a little help and guidance, they could come to an understanding of the poem. My fifth graders like a challenge, and as a teacher, there is nothing more fulfilling than seeing them go from zero to experts in one discussion.

The older boys had the poem “Dream Deferred” by Langston Hughes. With Martin Luther King, Jr. day just behind us, and Black History Month around the corner, it seemed appropriate to schedule the poem for this time. We would take a literary trip back to the Harlem Renaissance and learn about the importance of the movement.

Before reading the poems, I had students warm up with some questions on dreams. They had to record the literal definition of “dream” before adding their own personal knowledge of its various connotations. Then they each wrote some of their dreams for the future.

We read the poems and pointed out difficult vocabulary words. After coming to an understanding of the terms, we discussed the content. Both poems were about dreams, but to what kind of “dream” was each poet referring? In Poe’s, we decided that he mostly used the word in the literal sense; the illusions we create in our minds. In Hughes’, he mostly referred to the dreams that we aspire to.

Peeling back yet another layer of this theme, we researched what the Vedas have to say about dreams. Here are two of the verses we came up with:

“Śrī Śukadeva Gosvāmī said: O King, unless one is influenced by the energy of the Supreme Personality of Godhead, there is no meaning to the relationship of the pure soul in pure consciousness with the material body. That relationship is just like a dreamer’s seeing his own body working.”
SB 2.9.1

“Therefore this entire universe, which like a dream is by nature unreal, nevertheless appears real, and thus it covers one’s consciousness and assails one with repeated miseries. This universe appears real because it is manifested by the potency of illusion emanating from You, whose unlimited transcendental forms are full of eternal happiness and knowledge.
-SB 10.14.22

We read Srila Prabhupada’s purports, discussing what he meant by the use of the word “dream”. The material world is real in one sense, but it is unreal – like a dream – in the sense that our suffering and enjoyment here are temporary and only related to the body. We compared this waking dream to people crying while watching a sad movie. The movie is real, but the suffering of the audience is not real.

“This knowledge can help make people happy. Dreams are just illusions. And by sharing Krsna consciousness to others, they can come out of dreams.”

“You can tell them that you should dream of serving the Supreme Personality of Godhead and not dream of being God.”

“We can preach to people by saying that this is all a dream. Only the Spiritual World isn’t fake, except for when you use the material world for Krsna.”

Another great day in the Gurukula smile emoticon