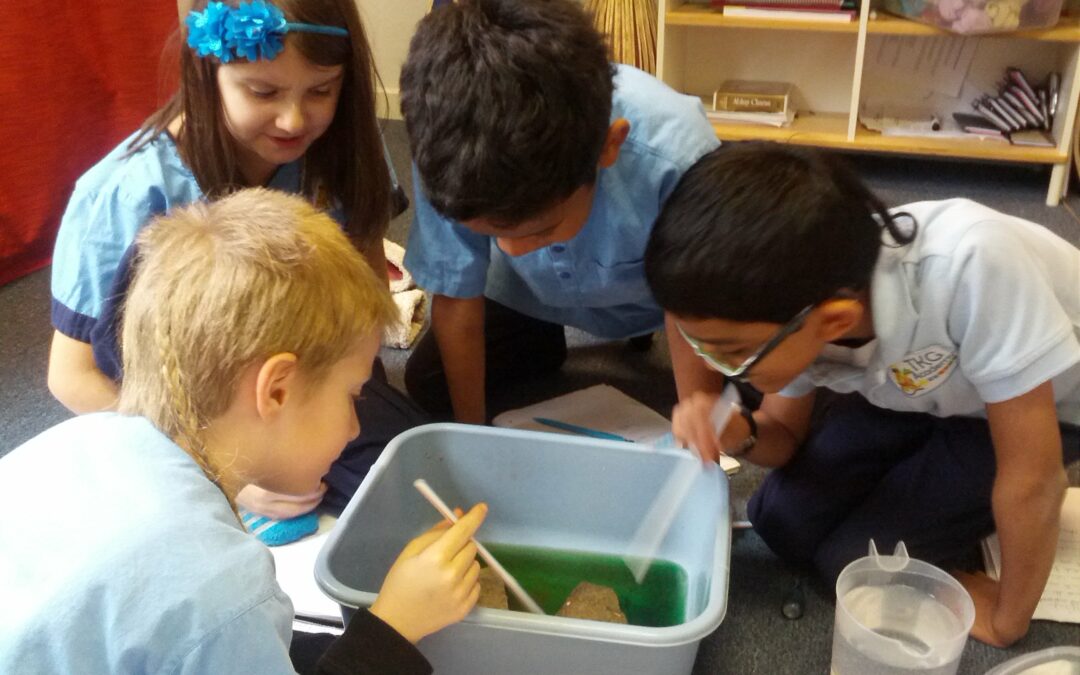 Middle Elementary students have been busy!  In January, they became Oceanographers as part of their Science and Social Studies Unit on Oceans. Here are a few of their accomplishments!  Ocean Currents Experiment, Geographical Regions, Oceans Book Swap, Layers of the Ocean Posterboard Project, Marine Pollution, Why Not to Eat Fish, and the Dallas World Aquarium Field Trip.  Full “gallery” of pictures is at the end of the blog. 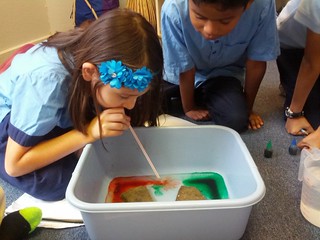 Ocean Currents:  Currents travel around the continents, mixing the warmer waters surrounding the equator with the cooler waters from the poles. Students replicated this by blowing through straws to create wind, and seeing how ice cubes melt, and boiling water mixes, with different colored drops of food coloring.    After they stopped shrieking in excitement, they recorded their observations. 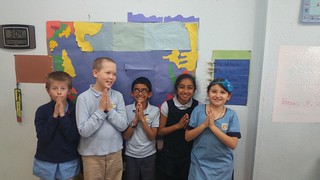 Continental Shelf, Continental Slope and Ocean Floor:  Students built their own Ocean Wall, where they labeled and described geographical locations in the ocean.  Seamounts, Trenches, Underwater Volcanoes, Coral Reefs, etc.  They were given assigned jobs and independantly worked, with little teacher’s assistance, to create their Ocean Wall.

Oceans Book Swap:  For research, students brought a total of 21 different ocean books from the library and home!  At research time, they sat at 2 books, gathered as much information as they could into their Science Notebooks, and then 15 minutes later, swapped the books with the next student.  This enabled them to determine which books would be helpful for their project.

Layers of the Ocean Posterboard Project:  This was the finale to the session!  Students studied almost 100 sea creatures, all set in the different layers of the ocean.  They researched, gathered facts, made mini-books, painted and presented their findings to the class.

Marine Pollution:  After studying the ecosystems in the ocean, we were surprised to learn about all the pollution dumped by humans!  Among other books, we read Abigail the Happy Whale and her decision to work with the other sea animals remove all the pollution on the ocean floor.  Did you know that the Great Pacific Garbage Patch is an area of pollution greater than Texas?  Students wrote persuasive expository pieces to convince us to keep our oceans clean!

Eating Fish:  Because of all the toxins in the ocean, fish have also become poisonous.  Students were able to explain why eating fish, harmful for one spiritually, is also harmful from a biological health standpoint!

We ended the unit with a field trip to the Dallas World Aquarium.  How amazing it was to see all of the creatures that were studied in real life!    Field trip pictures can be found here.