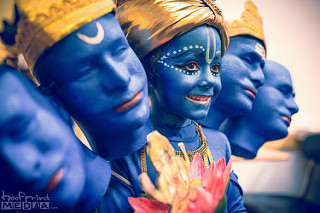 Even Halloween can be engaged in Lord Krsna’s service. At TKG Academy we celebrated the Fall Festival with the students dressed as characters from our devotional scriptures. The costumes included some of the Lord’s main incarnations, such as Lord Nrsimhadeva, Lord Vamanadeva, Lord Ramacandra along with His wife Sita, Their devotee Jatayu and Ahalya, Lord Parasurama and Kurma Avatar. There were other manifestations such as The Universal Form and Mohini Murti and some demigods, like Agni and Lord Siva. Lord Krsna’s personal weapon, the Sudarsana Cakra was present. We also had Lord Krsna Himself, in His original form as a cowherd boy in the village of Vrndavana, along with His mother Yasoda, His most beloved Srimati Radharani, other gopis and cowherd boys and the river Yamuna. We had some characters from the Mahabharata, such as Bhismadeva and Yudhisthira. The goddess Kali appeared in her very ferocious form and the most recent and merciful incarnation of Lord Nityananda joined as well. Everywhere you looked you were reminded of Krsna and His various pastimes. In fact, the students enacted those pastimes, according to the particular personality they were dressed as, thus further immersing our minds in remembrance of the Lord and absorbing our consciousness in Him.