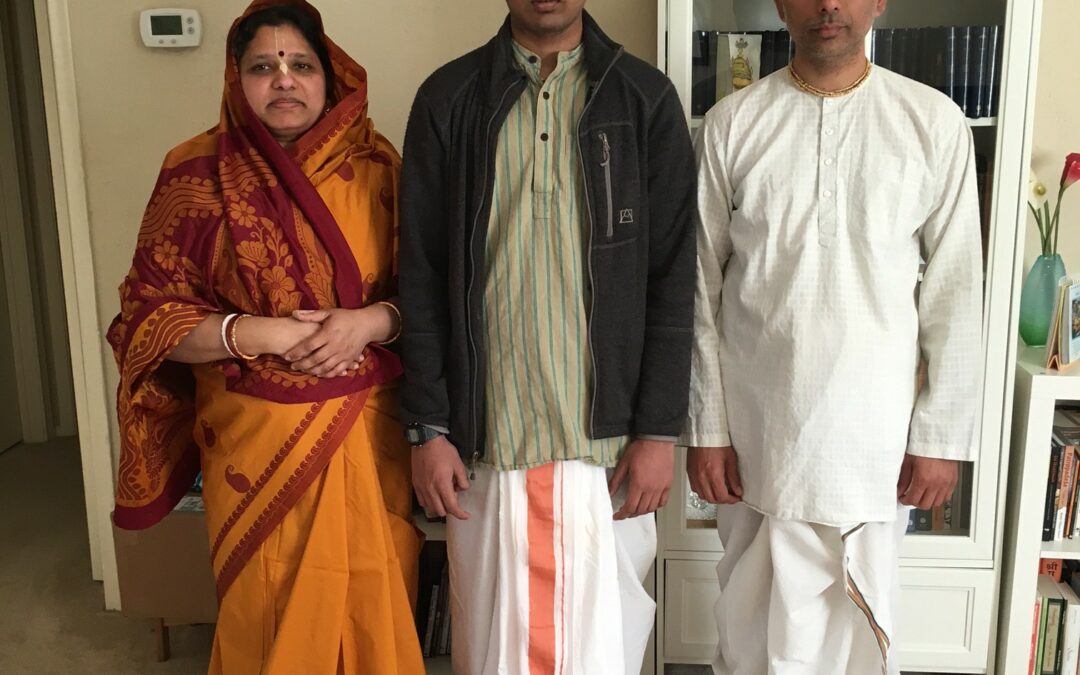 Speaking to Yudhisthira, the sage Vyasadeva said: “O child, there is nothing more difficult to practice than charity… It is extremely difficult to part with hard-earned wealth. But, O hero, properly earned wealth should be given away with an open heart to worthy persons.” (Mahabharata, by Krishna Dharma, P.329)

It is with deep gratitude that we receive the generous contributions from our donors. Out of kindness they choose to share their gain with our TKG Academy students. For this selfless act we are greatly thankful.

Sridhara-syama Prabhu (Sanjay Goel) and his wife Lalita Sakhi Mataji (Dr. Lalita Gupta) have been steady monthly donors of TKG Academy since several years now. When I asked Lalita Sakhi Mataji if we may write about her family for the “Donor Spotlight” she humbly declined. They have no interest in showcasing their donations or getting any recognition for it. Only when I insisted and convinced her that by doing so she will further serve our school, she reluctantly consented.

Sridhara-syama Prabhu and Lalita Sakhi Mataji met the devotees and attended classes while living in Omaha, Nebraska. In 2006 they received some books and their chanting beads and became dedicated practitioners. They have been attending the Dallas Radha Kalachandji temple since moving to Richardson in 2008.

Some years ago they considered moving closer to the temple and enrolling their son, Dhruv at TKG Academy. Plans didn’t work out as expected, and they decided to offer their support to the school by giving monthly donations instead. Lalita Sakhi Mataji also got involved with the Sunday school and enjoys sharing Krsna consciousness with the children. Her hope is that those teachings will have a strong and lasting impact on their lives.

Sridhara-syama Prabhu and his family are always engaged in service. He himself is a dedicated “Prison Ministry” preacher, going out weekly to share Krsna consciousness with inmates. He also spends several hours daily reading the philosophy and studying Srila Prabhupada’s books. He is a very renounced and enthusiastic devotee, though always maintaining a very humble mood.
His wife offers much medical advice and assistance to the devotees and has been involved in designing and sewing new outfits for the deities. Together they organize and host the Richardson Bhakti Vrksa group in their home and have thus inspired their friends on the path of devotional service.

I, too, feel inspired by their association and offer my sincere appreciation for their kind service and support.