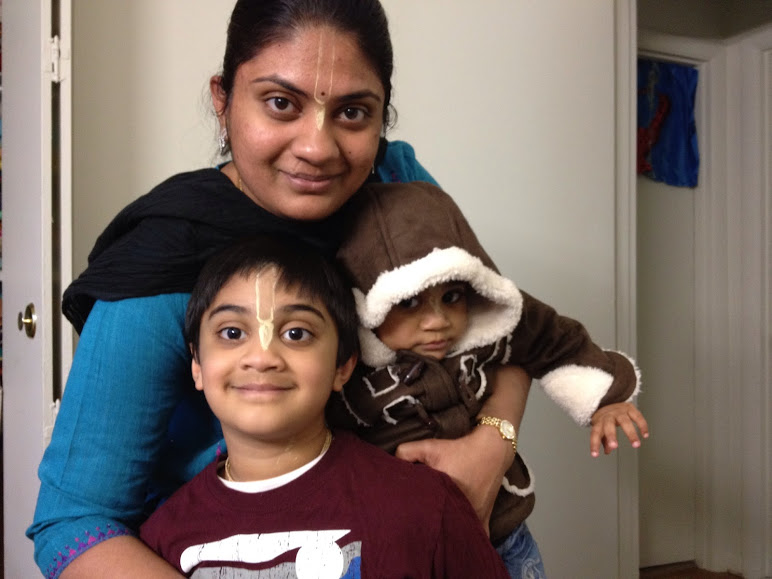 We would like to recognize His Grace Srinivasa Prabhu and Her Grace Radhika Krpa Mataji for all their service to the TKG Academy Gurukula this past school year.

Both became attracted to Krishna consciousness upon their visit to New Vrindavan in 2003.    They heard His Holiness Radhanath Maharaj’s eloquent talks about Lord Caitanya, and met many loving devotees.  They began to take shelter of their Siksa Guru, His Grace Yugal Kishore Prabhu and under his direction, they took initiation from His Holiness Radhanath Maharaj in 2011.
They moved to Dallas in the past year from Boston, with both of their sons, Madhava (age 3) and Gaurang (age 7) attending the TKG Academy.  Immediately upon coming, they became actively involved in Community Outreach and preaching programs, holding a weekly Bhakti Vriksha program in their home.   Their enthusiasm and support has been very encouraging and infectious.
They are dedicated to the Krishna conscious success of their two active boys.  Daily bed time story telling, engaging the boys in Deity Worship, kirtan, and japa are some of the ways they instill Vedic culture into their children’s hearts.
Srinivasa Prabhu is expert at videography and has already produced the Govardhan Puja Festivities by TKG Academy video.  Radhika Krpa Mataji has accepted the responsibility of Media Coordinator.  We welcome both to our TKG Academy Family.