“Nimai and the Thieves” by Nishant Sura 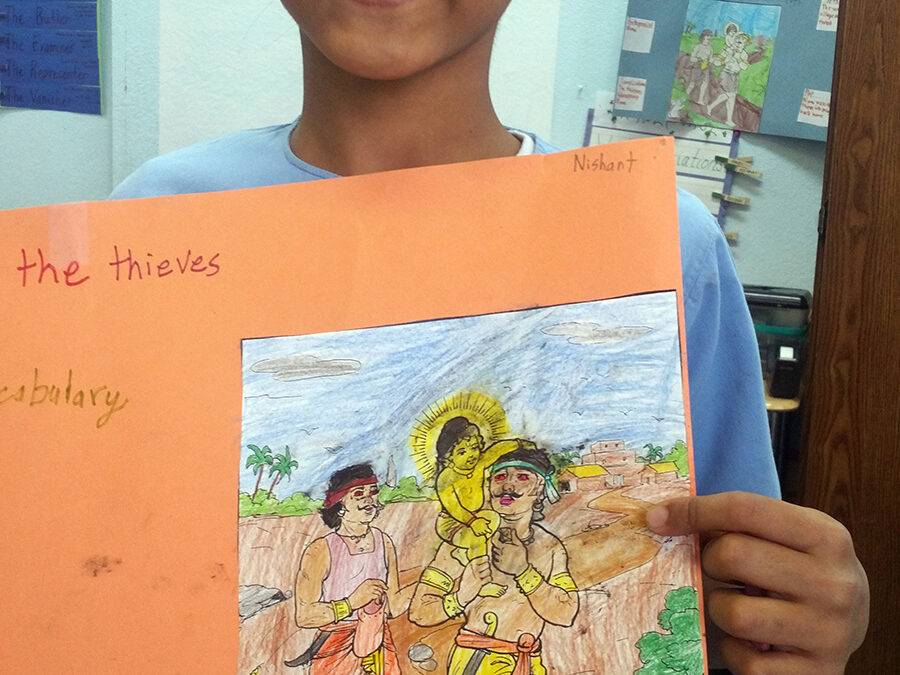 Five hundred years ago, baby Nimai lived with his mother, Saci Mata and father, Jagannath Mishra. He lived in a peaceful village place called Navadvip Dham. Nimai is actually Lord Krishna who came down to the material world to save everybody from suffering. One day, He was playing with Saci Mata in the courtyard. Mother Saci said, ”You play here; I will go and cook your lunch.” Nimai said, ”Yes mother.” Saci Mata went inside to cook knowing that Nimai was safe.

Meanwhile two thieves passed by Nimai’s house. One said, ”Hey, look over there!” The other said, ”I only see a little boy playing in the courtyard.” The first said, ”Look at what the boy is wearing.” Nimai was wearing gold bracelets and gold earrings. The thieves plotted to kidnap Nimai and steal all the valuable jewels that he was wearing. Since Nimai’s courtyard had no fence, the thieves just walked up to Nimai and said, ”Hello, we are your dad’s friends. Would you like to go visit your dad? We can take you to him. We can also give you barfi on our way there.” Nimai loved barfi, so He agreed to go with them. The thieves thought they tricked Him. Actually Nimai is the Supreme Personality of Godhead and knows everything.

The thieves carried Him on their shoulders and took Him far away from home. They took Him deep into a forest. At that time Mother Saci finished cooking and came outside in the courtyard but she did not see her Nimai. She thought that Nimai went to play with His friends. She asked Nimai’s friends where He was, but they didn’t know. Saci Mata began to become frantic. The sun started setting but still Nimai was nowhere to be found!

Finally Nimai thought: “Enough is enough. My mother is very sad and worried. I will need to turn these thieves around.” Suddenly Navadvip Dham was right in front of Nimai and the thieves. The thieves were confused to see that Navadvip Dham was there in all four directions! Magically, they had left the deep forest! The thieves had no option but to put Nimai back in the courtyard. Mother Saci saw them and asked them who they were but they were speechless. At that moment, Nimai spoke, ”I went to the river to take a bath but I got lost. These nice gentlemen found me and brought me back home.” The thieves were amazed at what Nimai said. Mother Saci invited them for lunch but they said politely declined. Then they quickly raced out of there!

In this way, Nimai showed that He was very merciful.  He didn’t get the thieves in trouble, and he let them get darshan of His lotus feet, and to carry Him on their backs!  I wish I was one of those thieves because I could also carry Nimai on my back.