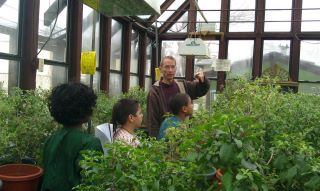 I found out that Shalagram Prabhu was about to release beneficial insects in the Tulasi house and this was too much of a teachable moment to pass up! As soon as I found out he’d be gracious enough to receive us, we grabbed our science notebooks and rushed over to be part of the action. He summarized our activities so well on his Facebook page that I’m just going to quote him here:

Melissa’s students came to the greenhouse and each picked one Tulasi that was infested with scale, and wrote down that Tulasi’s ID number. Then they tried different ways to estimate the infestation, such as by counting leaves (not many leaves on the infested plants) or by estimating the percentage of the plant that was infested, or by counting the infested branches. They also took some pictures of their Tulasi plants. Then we released some Lindorus beetles and they will monitor progress on their Tulasi plants.

And not only did we get to exercise our science skills, but by helping to release the beneficial insects, we also got to do some service for Tulasi devi. It just doesn’t get better than that! 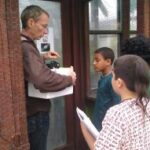 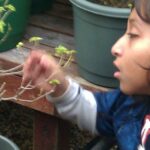 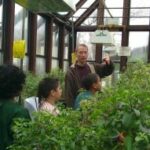 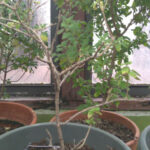